新书 | Empires of Vice: The Rise of Opium Prohibition across Southeast Asia 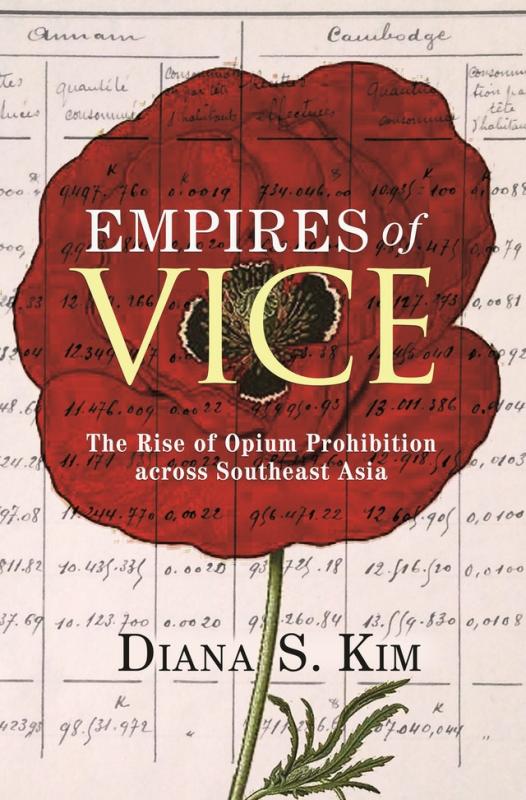 During the late nineteenth century, opium was integral to European colonial rule in Southeast Asia. The taxation of opium was a major source of revenue for British and French colonizers, who also derived moral authority from imposing a tax on a peculiar vice of their non-European subjects. Yet between the 1890s and the 1940s, colonial states began to ban opium, upsetting the very foundations of overseas rule—how did this happen? Empires of Vice traces the history of this dramatic reversal, revealing the colonial legacies that set the stage for the region’s drug problems today.

Diana Kim challenges the conventional wisdom about opium prohibition—that it came about because doctors awoke to the dangers of drug addiction or that it was a response to moral crusaders—uncovering a more complex story deep within the colonial bureaucracy. Drawing on a wealth of archival evidence across Southeast Asia and Europe, she shows how prohibition was made possible by the pivotal contributions of seemingly weak bureaucratic officials. Comparing British and French experiences across today’s Burma, Cambodia, Laos, Malaysia, Singapore, and Vietnam, Kim examines how the everyday work of local administrators delegitimized the taxing of opium, which in turn made major anti-opium reforms possible.

Empires of Vice reveals the inner life of colonial bureaucracy, illuminating how European rulers reconfigured their opium-entangled foundations of governance and shaped Southeast Asia’s political economy of illicit drugs and the punitive state.

Diana S. Kim is assistant professor of political science at the Edmund A. Walsh School of Foreign Service at Georgetown University.

“Kim’s argument adds a valuable dimension and a perspective from the colonies most affected in a period which has been less written about by historians. . . . [Kim] adds to our understanding of how fundamental changes in response to the consumption of opiates came about.”—Virginia Berridge, Addiction

“Empires of Vice is well researched, with sources ranging from government records and meeting minutes to personal papers from state and private archives. It is written in an accessible style and will be of value to scholars of Southeast Asia, drugs history, and colonialism.”—Eric Colvard, Journal of British Studies

“Empires of Vice is an important book that underscores the critical role of low-level bureaucrats in transforming the state. . . . [Diana Kim’s] work is deeply rooted in the central contributions and concerns of a broad set of literatures, but also, by shifting the object of empirical analysis to a different region, a later time period than predominant literature, and by looking closely at the anxieties of overlooked actors, Empires of Vice grows its own wings.”—Katrina Quisumbing King, American Journal of Sociology

“In this scrupulously researched and deeply engrossing book, Diana Kim shows why, after having benefitted enormously from the opium trade in Asia, the Western colonial powers acted to close it down. This is a book that will revise our understanding of one of the most significant but least understood episodes of imperial history.”—Krishan Kumar, author of Visions of Empire: How Five Imperial Regimes Shaped the World

“A major contribution. Empires of Vice is a crisply articulated, richly empirical, and carefully structured work that brings new findings and insights from Southeast Asia to the study of states and bureaucracies, colonialism and law, and political agency and everyday governance.”—Iza R. Hussin, author of The Politics of Islamic Law: Local Elites, Colonial Authority, and the Making of the Muslim State

“Empires of Vice addresses a topic of considerable importance to scholars of modern Southeast Asian history and illuminates the worlds of British and French colonial officials in new and evocative ways. A work of fine scholarship as well as an enjoyable read.”—John T. Sidel, author of Riots, Pogroms, Jihad: Religious Violence in Indonesia

“This timely and boundary-breaking book offers a novel approach to thinking about why opium has been so important in the colonial history of this part of the world. Kim is an exciting new voice in Southeast Asian studies.”—Eric Tagliacozzo, author of Secret Trades, Porous Borders: Smuggling and States along a Southeast Asian Frontier, 1865–1915