新书 | More Than the Great Wall: The Northern Frontier and Ming National Security, 1368–1644

More Than the Great Wall: The Northern Frontier and Ming National Security, 1368–1644

This groundbreaking book provides the first comprehensive analysis of Ming China’s pursuit of national security along its 1,700 miles of northern frontier. Drawing on a wealth of original sources, John Dardess vividly portrays how Ming China’s emperors, officials, and commanders in the field thought, argued, and made decisions in real time as they worked to defend their country. Despite common perceptions of the central role of the so-called Great Wall of China, Dardess convincingly shows that the wall was but a minor piece in a much bigger effort to battle Tatar looting. Dardess immerses readers in the day-to-day world of the Ming as he explores the question of how leaders kept their country safe over the 276 years the dynasty ruled. 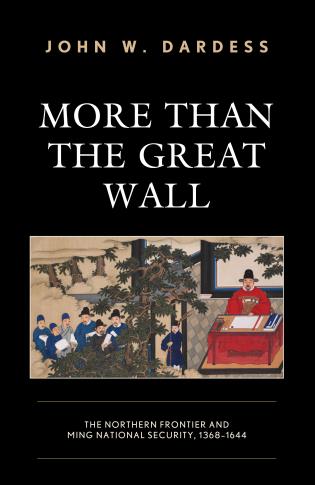 John W. Dardess (1937–2020) was professor emeritus of history at the University of Kansas. His books include Ming China, 1368–1644: A Concise History of a Resilient Empire; Governing China, 150–1850; A Political Life in Ming China: A Grand Secretary and His Times; and Four Seasons: A Ming Emperor and His Grand Secretaries in Sixteenth-Century China.

With his impressive command of the sources, John Dardess has produced the comprehensive narrative of China’s northern frontier in Ming times.
— Michael Szonyi, Harvard University

Drawing from an impressive array of primary sources and informed by recent secondary studies, this book offers a tremendous overview and analysis of the evolution of Ming defense policies concerning the northern frontier. Countering traditional narratives of stasis and decline, John Dardess reveals the dynamic resilience of the Ming bureaucratic-military infrastructure, providing keys to understanding the reasons the Ming maintained their hegemony in Asia for nearly three centuries. Particularly salient is the author’s consideration of the characters and personal interests of the various Ming emperors in shaping policy. The picture that emerges is one of strategic flexibility based on realpolitik assessments but glossed with a veneer of stability. At the same time, the author is sensitive to the fluidity of steppe politics as they related to the Ming tributary system.
— Kenneth Swope, United States Naval Academy

This is a truly extraordinary book that will become required reading for anyone studying Chinese history. The longitudinal study of northern border security over centuries puts into context the very human struggle of Ming emperors, statesmen, and generals to manage a persistent and ultimately insoluble external threat. Despite changes in emperors, officials, and policies, the drivers of barbarian incursions remained outside the grasp of the Ming government in Central Eurasia and the steppe. Dardess has done a great service to the field of Chinese history and security studies in driving home the unpleasant truth that foreign security threats can often only be reacted to rather than resolved.
— Peter Lorge, Vanderbilt University