书名：Rupture, Evolution, and Continuity: The Shandong Peninsula in East Asian Maritime History during the Yuan-Ming Transition 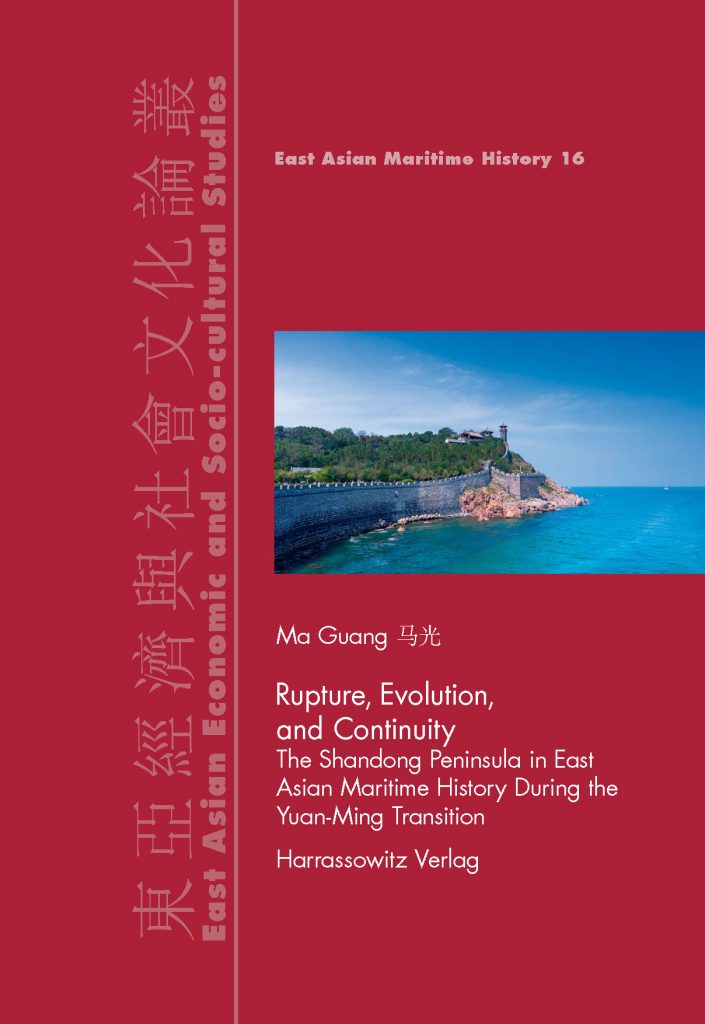 While previous scholars have paid much attention to the maritime history of Guangdong, Fujian, and Zhejiang in southern China, by contrast, there are no monographs or articles focusing on maritime history of Shandong in northern China in Western scholarship. However, as a matter of fact, Shandong played a significant role in East Asian maritime history. This book attempts to break through the “Southeast China-centric” framework by focusing attention on the Shandong Peninsula during the Yuan-Ming transition (late thirteenth to early fifteenth centuries).

Many scholars have argued that there was rupture between the two dynasties in politics, society, and culture, or have argued the opposite from the perspective of land-centric history. By placing Shandong maritime history into a supra-regional, global historical context, the author’s study challenges the Southeast China centrism, the terra-centric model and various traditional views. Ma argues that on the one hand, there were obvious “ruptures” of maritime policy and maritime trade from the Yuan to the Ming dynasties, and on the other hand, some things, such as official sea transportation, continued from Yuan to Ming times. More importantly, although the function of the Shandong Peninsula changed from being primarily an important commercial entrepôt in the Yuan to being a crucial military base during Ming times, it is worth mentioning that it was a process extending over several decades, rather than a simple rupture.

Historical Background and the Tasks at Hand

1.1  Domestic Maritime Trade between Shandong and Other Regions in Yuan Times

1.2 The Declining Local Maritime Trade of Shandong in Ming Times

2.1  Changes in Embassy Routes during the Yuan-Ming Transition

2.1.1 The Official Relations between Yuan China and Koryo

2.2 The International Trade between China and Korea

2.2.3 Korean Tributary Missions and Their Trade in Ming China

3 .1 The Definition, Origins and Development of Wokou

3 .1.1 The First Evidence of the Use of the Word Wokou in Korea

3 .1.2 The First Written Evidence for Wokou in China

3.1.4 Wokou during the Early Ming Dynasty

3.3.4 The Weak Coastal Defence in China and Korea

4.4 Conflicts and the Rupture of Wokou Diplomacy

5.1 The Coastal Defence System in Shandong before 1398

6.2 Shipment of Military Supplies between Shandong and Liaodong in Ming times

Appendix 7 Officials of the Wendeng Division in Ming Times

Map 1 The coastal regions of Shandong during the Ming dynasty

Map 3 Sea routes for grain transport during the Yuan dynasty

Table 2 The frequency of wokou raiding activities in Ming China

Table 5 Battalions, companies and their forts of the Laizhou guard

Table 6 Battalions, companies and their forts of the Dengzhou guard

Table 7 Battalions, companies and their forts of the Ninghai guard

Table 9 Different styles of official seals in the Ming dynasty

Figure 3 Sea transport of grain in Yuan times by period