英国Foreign Office and Foreign and Commonwealth Office records from 1782

This guide will help you to find records created by the Foreign Office since its birth in 1782, and by its successor, the Foreign and Commonwealth Office, and now held at The National Archives.

The records of the Foreign Office provide a wealth of information on British relations with foreign states from 1782 to the present day and can also provide insights into the history of domestic issues in countries around the world.

The guide provides advice on the different ways in which you will need to use our own catalogue as well as the indexes and registers created by the Foreign Office itself to find individual records. There is also advice on how to find treaties dating back to 1695 and now held among Foreign Office records.

The Foreign Office was created in 1782 and became the Foreign and Commonwealth Office in 1968. It was the government department responsible for the conduct of British relations with nearly all foreign states between those dates (British colonies and dominions were dealt with by separate departments).

For further details, see the administrative histories in Discovery, our catalogue, for departments FO and FCO.

Most in-depth research into Foreign Office records requires a visit to our site in Kew. There are, however, some online and published resources which allow you to search for and view a limited number of records without having to visit.

A scattered selection of records have been reproduced either in published volumes or online. These include:

4. How to search for original records: getting started

Most Foreign Office and Foreign and Commonwealth Office records held at The National Archives are not viewable or downloadable online. To view them you will either need to visit our building in Kew, find references to records on our online catalogue with which you can order copies, or pay for research to be done for you.

To search for records you will need to do one or both of the following, depending on the type of record and the date of the record:

For details on when and how to use these resources see the following sections of this guide.

The most numerous type of Foreign Office record is general correspondence. There are tens of thousands of records of general correspondence at The National Archives, ranging from letters, both personal and official, telegrams and despatches, to reports, notes and memos and anything else that was sent from one place or person to another in the business of the Foreign Office.

How you search for correspondence depends on when it was created and the changing registry systems of the Foreign Office down the years.

For detailed advice on how to search for general correspondence from different periods see the following guides:

Consulting confidential print is a good way to gain a summary overview of Foreign Office political correspondence before accessing the extensive, more detailed holdings in the main general correspondence series referred to in section 5.

6.1 What were confidential prints?

From the late 1820s, correspondence of particular significance began to be printed in several copies and distributed to officials in the Foreign Office, to the Cabinet, to other departments and to British missions abroad. These copies were known as confidential print.

By 1906 nearly every important despatch or telegram was printed routinely but the practice of confidential prints died out in the 1970s with the arrival of photocopying.

Confidential prints vary from a single document to a substantial volume of papers, and are numbered individually, roughly in order of printing.

6.2 How to search for confidential prints

A good starting point is the FO Division 2 description in our catalogue which lists record series of confidential prints on particular countries, regions and subjects. To search for specific documents you can either:

Click on the link to any series in the list and search by year using the ‘date range’ boxes.

Use the following fields and search terms in the advanced search:

7. Records from embassy and consular archives

7.1 What do embassy and consular records consist of?

7.2 How to search for embassy and consular records

Please note that not all embassy and consular records have survived.

Basic searches by country and year

Use our catalogue to search for document references with the advanced search, using the boxes to restrict your search results to FO and FCO references, specific years and searching with combinations of the following keywords:

The only way to search for these records by subject is to visit us at our building in Kew and use the registers of embassy and consulate correspondence that exist from the 1820s onwards.

2. Once you have the register, select the appropriate section within it (to/from Foreign Office; to/from government of the host country; Commercial, Treaty etc.).

Page from a Foreign Office register for embassy and consular records

4. Armed with the details of the relevant entries from the register, return to the advanced catalogue search to identify and order the relevant volume of correspondence, using the country name AND “embassy and consulates” AND “general correspondence” as keywords, and restrict to the relevant year.

5. The volumes of correspondence (an example is shown below) are arranged by author and recipient, then by date. Within the relevant volume, look for the despatch number. 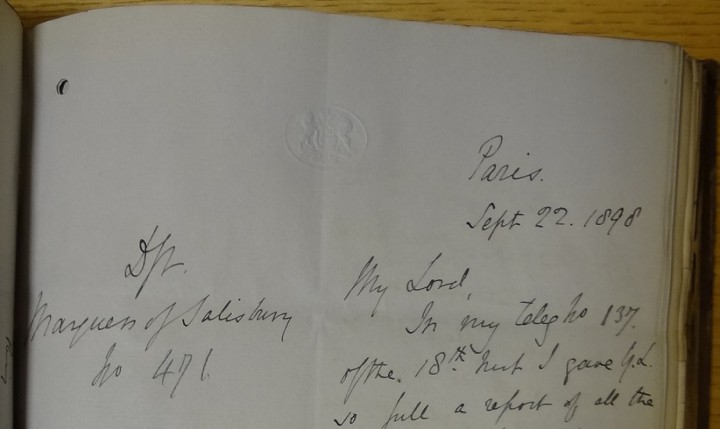 Distinct sets of records were created at different stages of the treaty process, and these are held in different record series.

Before a treaty is made, the parties exchange the Full Powers or authorisations granted to their plenipotentiaries.

The document reciting the agreed terms of the treaty, signed and sealed by the plenipotentiaries of each side is the Protocol.

Following the signing and sealing of the Protocol, ratifications were drawn up, and signed and sealed by the head of state of each party and exchanged, or sometimes deposited in an agreed place if there were several parties.

8.2 How to search for records of treaties

Follow the links in the table below to search the respective series by one or more of the following:

9.1 Private papers given directly to The National Archives

These are private papers of diplomats and politicians involved in foreign affairs directly gifted to, or deposited with, The National Archives (previously the Public Record Office).

Browse through our catalogue references for these from PRO 30/1-99 or search for them by name of author or place of origin using the advanced search and entering PRO 30 in the first reference box.

You can also find private papers held in archives elsewhere using our catalogue. Search by author name and click on the record creators tab within your search results.

These are unregistered papers of mostly (though not entirely) 19th century politicians, diplomats and officials taken away on retirement but subsequently returned to government.

Search for references to these using the advanced search in our catalogue, searching by surname, year range and entering department code FO in the reference box.

These are the private office papers of mostly 20th century politicians, diplomats and officials surrendered to government on retirement.

Search for private office papers by author surname using the search engines in the FO 800 and FO 794 series descriptions.

10. Records of international commissions and conferences

The papers of a large number of bilateral or multilateral international commissions, from 1790-1967 are among the Foreign Office records at The National Archives.

The records of British delegations to international conferences from 1814-1976 are in held in both FO and CAB departments.

Search for the records of a commission or conference using the advanced search , restricting your search to reference FO (and, for conferences, CAB) and searching with one or more of the following terms:

See our catalogue series divisions for FO and CAB for further details.

11. Records of wartime departments and missions

We hold records of various departments and missions that operated within the Foreign Office during the First and Second World Wars.

Search for references to records created by the following agencies and departments set up by the Foreign Office in the First World War by clicking on the references and using the series-specific search boxes:

For background details see the description for FO Division 12 to which the above series belong.

Search for references to records created by the following agencies and departments set up by the Foreign Office in the Second World War by clicking on the references and using the series-specific search boxes:

12. Records of the Allied Administration of Germany and Austria after the Second World War

The Foreign Office inherited the records of a number of the organisations through which the Allies administered what are now Germany and Austria after the Second World War. These were:

12.1 What kinds of records are held at The National Archives?

The surviving records of the Control Commission for Germany (British Element) are held at The National Archives but are incomplete as only a small percentage of the files were selected for permanent preservation. The overwhelming majority of these are administrative in nature and rarely contain personal details.

In addition to the above, there are numerous files and material on denazification generally including:

12.2 How to search for records

For a breakdown of the record series relating to the Allied Administration, see the FO Division 14 page.

In addition, the records of the Allied Kommandatura, the four power body that administered Berlin until the end of the Cold War, are in FO 1112.

The file descriptions used by the Control Commission were very broad and this is reflected in the record descriptions in our catalogue. A keyword search of our catalogue is therefore of limited value but it may be worth completing the following fields in the advanced search with the terms provided:

You should also consult Akten der Britischen Militärregierung in Deutschland: Sachinventar 1945-1955 (11 Volumes, published by KG Saur 1993). These volumes, available from The National Archives library, provide brief details (in English and occasionally German) of the Control Commission documents for Germany (the “G documents”) as well as the associated National Archives references.

The primary series of records relating to intelligence matters within the Foreign Office are the records of the Permanent Undersecretary of State in FO 1093.

From the FO 1093 series description, search by year and subject or, instead, browse through the document descriptions for the whole series.

Other significant record series include the reports of intelligence agents from 1795-1815 in FO 38 and details of the funding of British intelligence operations before 1909, known as the Secret Vote, in HD 1 and HD 2.

Louise Atherton, Never Complain, Never Explain: Records of the Foreign Office and the State Paper Office 1500-c.1960 (Public Record Office, 1994), includes well-explained guidance on how to use the registers and indexes to Foreign Office correspondence