图书 | Breaking with the Past: The Maritime Customs Service and the Global Origins of Modernity in China 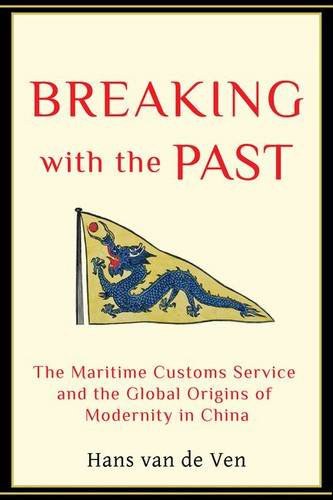 Between its founding in 1854 and its collapse in 1952, the Chinese Maritime Customs Service delivered one-third to one-half of all revenue collected by China’s central authorities. Much more than a tax collector, the institution managed China’s harbors, erected lighthouses, and surveyed the Chinese coast. It funded and oversaw the Translator’s College, which trained Chinese diplomats while its staff translated Chinese classics, novels, and poetry and wrote important studies on the Chinese economy, its financial system, its trade, its history, and its government. It organized contributions to international exhibitions, developed its own shadow diplomacy, pioneered China’s modern postal system, and even maintained its own armed force. After the 1911 Revolution, the agency became deeply involved in the management of China’s international loans and domestic bond issues.

In other words, the Customs Service was pivotal to China’s post-Taiping integration into the world of modern nation-states and twentieth-century trade and finance. If the Customs Service introduced the modern governance of trade to China, it also made Chinese legible to foreign audiences. Following the activities of the Inspectors General, who were virtual autocrats within the service and communicated regularly with senior Chinese officials and foreign diplomats, this history tracks the Customs Service as it transformed China and its relationship to the world. The Customs Service often kept China together when little else did. This book reveals the role of the agency in influencing the outcomes of the Sino-French War, the Boxer Rebellion, and the 1911 Revolution, as well as the rise of the Nationalists in the 1920s, and concludes with the Customs Service purges of the early 1950s, when the relentless logic of revolution dismantled the agency for good.

Hans van de Ven is professor of modern Chinese history at Cambridge University. He has written extensively on China’s military history and the history of the Chinese revolution.