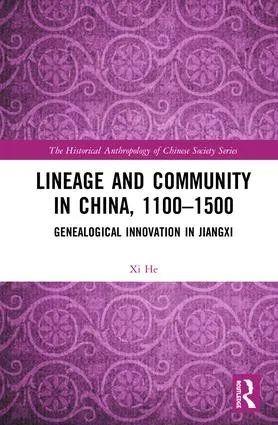 Tracing descent from common ancestors was extremely important in imperial China. Members of such lineage communities sacrificed to ancestors in periodic ceremonies, maintained written genealogies to demonstrate their descent, and held some properties in common. This book, based on extensive original research, provides evidence that the practice originated much earlier than previously understood. It shows that in the eleventh century, in southern China under the Song dynasty, the method of compiling a genealogy in the form a table, that is, to say a family tree, replaced its statement as a textual paragraph and that this allowed the tracking of multi-line descent in ways that had previously been impossible. The book also reveals that the practice of recording and presenting genealogical information was not originally unique to communities of common surnames, but that the Southern Song government, keen to encourage loyalty to the state and cohesion within communities, favoured the building of common surname lineages, a practice which then had far-reaching consequences for the nature of Chinese society over a very long period.

1. Introduction
Part 1. Jiangxi
2. Turning local, turning literary
3. Economic boom and its limitations
Part 2. Tracing lineages
4. Naming versus co-residence
5. Writing down the genealogy
6. The lineage made real
Part 3. Imagining communities
7. Impetus from religion
8. Loyalty in the Song-Yuan Transition
9. Taxation and land ownership from the Song to the Ming
10. The lineage as ideology in the Ming

11. Conclusion: The elite and the rest

Xi He is an assistant professor in the Department of History at the Chinese University of Hong Kong.

Historians are being increasingly attracted by the methodology of historical anthropology, an approach which combines observations in the field with documentary analysis, both of official documents and of documents collected from local society. In China, historians have been pursuing such local historical research for a generation, with very little of this work being available in English hitherto. This series makes available in English research undertaken by the Historical Anthropology of Chinese Society project based at the Chinese University of Hong Kong, and related work. The books argue that top-heavy, dynasty-centred history is incomplete without an understanding of how local communities were involved in the government process and in the creation of their own historical narratives. The books argue that Chinese social history needs to be rewritten from the bottom up.